After wrapping up the long-running and epic DL-series modules that carried players through the War of the Lance and beyond, TSR decided the first box set for Dragonlance would detail… another continent? (Classic Dragonlance wouldn’t get its own box set until 1992!)

It was a head-scratcher, to be sure, but TSR clearly wanted to break new ground. Out of this came the new continent of Taladas, which jettisoned all the familiar Dragonlance touchstones.

The gods of Ansalon are present, but with different names and aspects. Dragons are all outcasts here; don’t assume you know them from their Monster Manual entry. Races – humanoid and otherwise – are quite different than usual Dragonlance versions. There are dwarves afraid of underground spaces, for example. Kender turned dour and suspicious. No Dragonlords, no Mage Conclave, etc.

When it comes to turning tropes on their head, Time of the Dragon reminds me more of Dark Sun than Dragonlance.

That said, Taladas was devastated by the Cataclysm as was classic Dragonlance: PCs enter a grim, beaten-down world. It’s up to them to make it better.

What the designers didn’t realize at the time is that they were creating the first major fraction in the Dragonlance line, as players might now be interested in the traditional continent of Ansalon or the new continent of Taladas, but probably not both. Dragonlance would become even more fractured in future years, as the timeline was moved forward in Dragons of Summer Flame (1995), Dragonlance: Fifth Age (1996), and the War of Souls trilogy (2000-2002).

Time of the Dragon at DTRPG. Not just PDFs for TSR products! There are also Shannon Appelcline‘s always-fascinating essays on the history of the RPG item, takeaways, and connections past and future.
See this thread at the Piazza forum questioning Dragonlance’s fractioning, and exploring the history of the setting’s reboots. Great old school Dungeons & Dragons RPG discussion.

Time of the Dragon [BOX SET]

Dragonlance product line detailed over at my RPG Reference site

That art look familiar? It’s the late Robin Wood. Title is The Music Lover. TSR first used the piece for the cover of Dragon Magazine 97 (April 1985).

Guidebook (112 pages) details the geography and inhabitants of Taladas. David Cook has primary writing credit for Time of the Dragon. Stephen Fabian did all the interior art.

Southern Hosk is most densely-inhabited area. The Minotaurs vie with the Elves and cruel Thenol for regional supremacy.

24 cards to help play in this new world. (They’re all numbered on the back in case you’re trying to complete a set.)

Next: Imagine if Gnome inventions actually worked? On Taladas, they do.

Plus cards with detail sections of Kristophan.

A couple of bonus shots of a Time of the Dragon in original TSR factory shrinkwrap. [Relevant: Original TSR Shrinkwrap? What to look for on a D&D Expert Set (1980)]

Accessories: Taladas got a few modules (the DLA series) and a couple of novels from Wizards of the Coast.

D&D Wrath of the Immortals: The Geography of Mystara’s Cataclysm (1992)

3 thoughts on “Time of the Dragon (1989): Taladas, the Other Shattered Continent in Dragonlance” 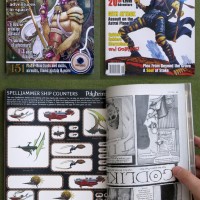 Some #Spelljammer, #Planescape, and #DarkSun 1990s fiction hitting the shelves today. Experience the worlds between games.
The Land of the Mists Promo Poster (1998) was given out at conventions after the handover from TSR to WotC. They are seldom seen today. A Ravenloft map by Rob Lazzaretti on one side, with essays on the other. Full photoshoot at my game blog. Enjoy! -Wayne
Our final session of Gary Gygax's Forgotten Temple of Tharizdun! The party delved far below the Temple level, donning the priestly garb of a terrible alien entity, performing perilous rituals, never quite sure what was going to happen next...
Azhanti High Lightning deck plan maps, all 14 of them together, Wayne-sized! Traveller's AHL game (1980) could be played like a sci-fi megadungeon. More pics over at my photoblog:
Tales of the Arabian Nights (WEG, 1985) sends the players far beyond the mythic Arabia of Aladdin, seeking fortune and fame. There are several ways to play the game, with countless outcomes. I delve into this very cool boardgame at my photoblog. Enjoy! -Wayne
Classic SSI Gold Box Poster (1989) promoting Advanced Dungeons Dragons Computer Games Azure Bonds, Hillsfar, and Pool of Radiance. These were great little turn-based games where you ran a party of characters through wilderness and dungeons.